When I realised that I was going to use that title for this post I had a feeling that any D-parents reading would immediately have a clear idea what it would be about and had probably experienced it at some point.
It was one of those experiences that so many wonderful bloggers have mentioned before where the true, true reality of your situation really slaps you back in the face.
You have been cruising for a while, getting on with the BG tests, the pump site changes, the lows and highs, the nights and the days and even sometimes daring to feel like you are living a regular life (Ha! Right?!) and then something happens that makes the ground shift, and things fall into a different focus, and reality bites.
Frank and I were at my friend Helen's house for our monthly home ed meeting and the kids, as always, were having a ball racing around together, only calling into the kitchen for snacks and hugs.
They decided to play Hide and Seek.
They do this every time and have fun in Helen's lovely garden, hiding near the chickens or behind the shed.
This time was fine apart from the moment when they all seemed to begin playing another game and I happened to hear one of them mention quietly that they hadn't found Frank yet.
***********************
My adrenal glands leapt into action and I felt a kind of little jolt inside me.
I checked again whether they had found Frank yet and they confirmed that they hadn't.
It was 12:15.
Lunchtime.
Yes, he had had snacks but he had also been racing around lots.
I put my coffee down and headed out to the garden to find him, thinking he'd just hidden somewhere they hadn't yet looked.
I looked everywhere outside.
I called him.
I told him the game had finished and he had won.
Nothing.
I looked inside the house. I called again. I went outside again and called.
Other parents now joined me and called and looked and called again.
Quietly and in my British way I began to panic. I sounded calmer but my friends saw how set my jaw was and how my eyes were darting all around.
The film running through my brain had Frank passed out and fitting.
I welled up, ready to cry.
One of the children mentioned then to his Mum that Frank was "under a table".
We all checked again under all the garden tables and then finally, finally I saw Frank's trouser leg under a side table in the lounge.
He was conscious, and smiling, and wondering why it took everyone so long to find him.
My knees felt weak.
The tears began to come but I managed to sniff them away.
Frank was so pleased he had won the game.
Then Helen said "Are you OK?" and all I could say and feel was "Yes, but scratch the surface and it's always there, always".
***********************
And it is, isn't it.
Some days we can feel almost carefree, but scratch the surface ... 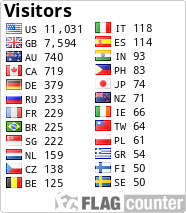