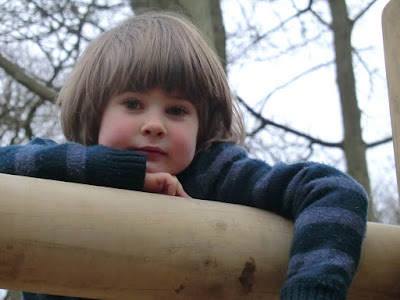 This is Frank.
He has Type 1 Diabetes.
And he needs a haircut!

At the hospital this week Frank was weighed and measured and his HbA1c taken (7.7, up from last time but I am truly happy with anything under eight. So, even though I shall work even harder I am not unhappy with the result).
I had been concerned about Frank having lost weight after he jumped on the scales at home and seemed to be about 5 or so pounds lighter than I remembered from our last hospital visit.
So, at our appointment we looked at the numbers and the results of the blood tests were discussed and all seemed well.
I wasn't too embarrassed at having raised my concerns and was told that I had been right to do so. It does seem that our scales weigh lighter than those at the hospital but Frank is definitely looking slimmer, so I am pleased to have had my mind put to rest this time.
Anyone with a child with this condition will know that it is wise to keep alert to other changes as the chances of thyroid issues or coeliacs is higher in Type 1 Diabetics than in others.
I had convinced myself that we were facing a thyroid problem when in fact, at present at least, all seems to be well.
And I am so very grateful for the comments I received about this.
I found it hugely comforting.
Thank you.
*********************************************************
In other news I couldn't resist posting these photos from today as they really made me smile.
They illustrate something that I am aware of every day as Frank and I go about our days: we are wired differently.
We have been working today on making a board game to go into a story sack that were will be giving to another homeschooling family soon. Once we had done our game Frank got all excited about making another and so we did.
Well, I got the board ready with the numbers and then left him to create the game whilst I did some gardening.
Coming inside I brought some hyacinth flowers that were getting past their best and decided to make a spring garland for the front door.
So, I sat with my boy and did my girlie stuff whilst he made his game.
The contrast of what our brains love was wonderful!
I leave you to enjoy the pictures as they reveal our inner selves ... 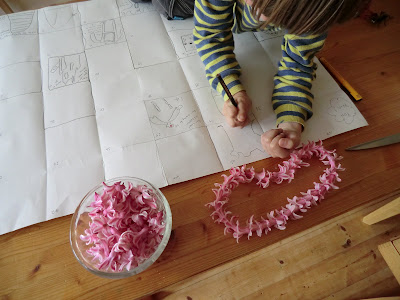 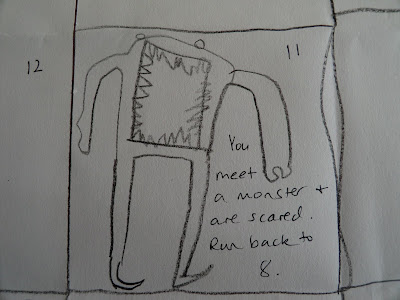 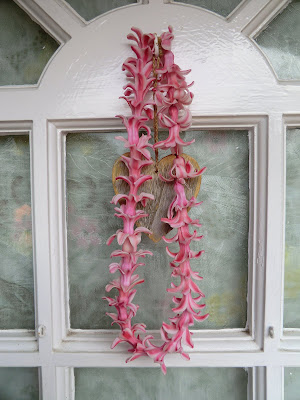 And interestingly when I spellchecked this, the word coeliacs came up as cowlicks!
Cool.
Posted by Jules at 21:58 5 comments:

An altered corner of my home 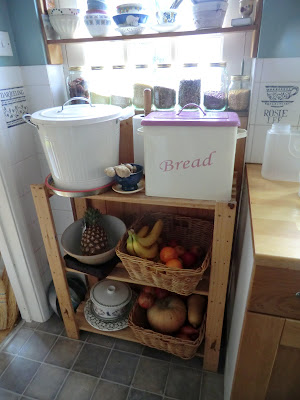 A while ago Andrew and I were discussing streamlining the kitchen and making sure that everything in it was useful or beautiful or both.
We had a shelf unit, very cheap pine, that I think I'd had as a student back in the day and that we used in the corner of the kitchen for the compost bin and the baskets of fruit and veg.
It was getting dusty and was hard to clean. You can see it above in the first picture.
So, a conversation ensued and we reclaimed it.
Now, when I say "we", what that actually means in this house, when it comes to designing shelves and putting them up, is that I put the kettle on and keep Mr Powertool happy with tea and he does all the work!
Well, I do the Frank-wrangling and keeping him away from the powertools bit.
I think Andrew did a fab job and love the clean lines and easy to keep tidy shelves. 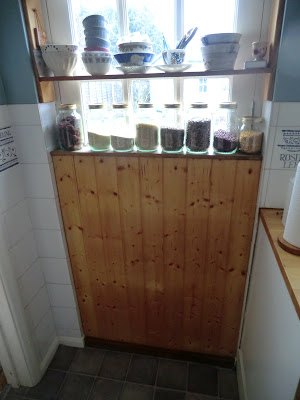 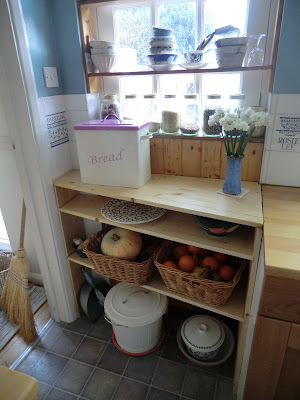 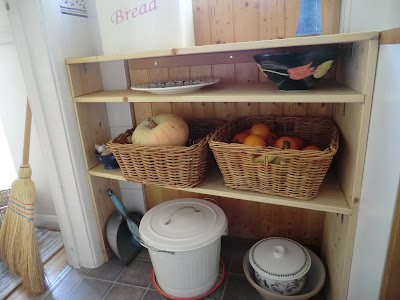 Yes, my life has come to this: I am very excited with about my new shelves!
Posted by Jules at 21:06 3 comments: 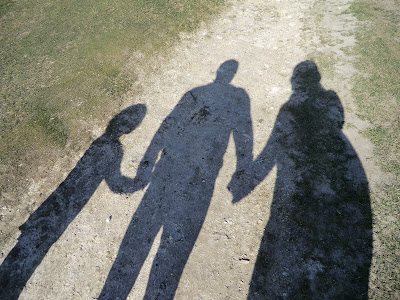 ~our spring shadows (I am not really shaped like a turtle! The wind took my clothes and puffed them out!


Um, hi there!
A month ago we had been packing for a three day little road trip and were only twenty minutes away from hitting the road when the call came to say Andrew's Mum was on her way to hospital.
The trip was put on hold until last weekend when we made it to Surrey to visit my lovely cousin Brian and his fab family and then went on to Lewes for the day.
Two days and one night with weather so blue and hazy and gorgeous that we returned home feeling like we'd been away a week!
Oh, the sun on our skin!
Oh, the dawn chorus every day!
Oh, road trips with my boys! 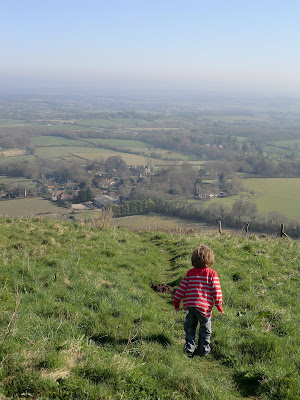 ~ my favourite picture of the trip ~ can you smell the fresh spring air! ~ 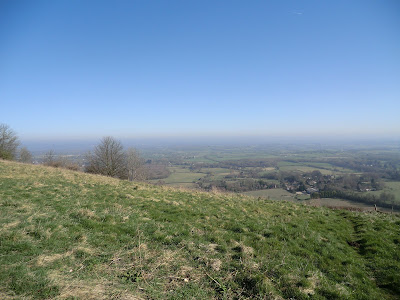 ~ at the top of Ditchling Beacon, Sussex ~ 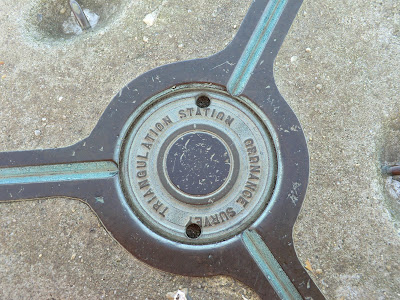 And now we are home and life is hectic with Andrew working two jobs this week and helping his Dad out a bit too.
Diabetes has been kicking my butt for the past fortnight with high blood sugars over and over again, despite my bolusing like a maniac for every morsel of carbohydrate.
And we are concerned that Frank seems to have lost weight recently and have a hospital appointment tomorrow to look into possible reasons.
I so hate diabetes.
Hopefully it is nothing but a big growth spurt.
My gut tells me otherwise but maybe I am just preparing myself for the worst so I can be pleasantly surprised!
I will let you know what happens but will sign off for today as Frank would like to sit in the sun and hear some Harry Potter.
And life always feels good when the sun is out and the birds are singing and we are reading Harry Potter.

Today, I found out that one of the three photographs I submitted to a local project called Colchester 24 is on display at the central library in Colchester.
Colchester 24 was a photography project where people living here were asked to take photographs during a 24 hour period and submit some for a chance to be used as a record of our town on this day.
Thousands of photographs were entered.
I only sent three and so am really quite amazed that one of mine was chosen and that it now sits proudly, among around only 30 others on display at the library. Even the Mayor is going to be there tomorrow opening the exhibition officially. Sadly, I won't be able to make it as we have an important Colchester Circle-D meeting here at the house and that's more important.
Here is the picture.
I called it "The little chef". 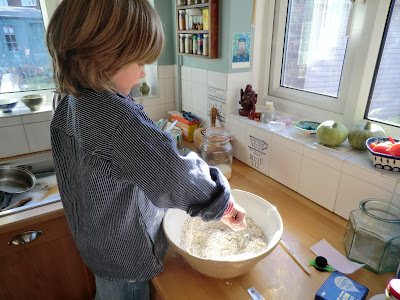 **********************************************
We hosted Janet's funeral (Frank keeps calling it a "carnival" and we have taken to using this word too. Much more positive, eh?) this Wednesday and all went well.
Andrew is doing OK, feelings ebb and flow at times but he's strong.
We have a busy weekend ahead with lovely Circle-D friends tomorrow and my birthday on Sunday.
I will be back soon, with tales of it all and finished house and knitting projects.
Have a great weekend everyone and thanks so much for all your kind comments and thoughts this past week.
Posted by Jules at 19:22 8 comments:

This time last week, almost exactly to the hour, we received a call from Colchester General Hospital to say that Andrew's Mother, Janet, was about to pass away and that Andrew and his father should head up to the hospital.
She had only been admitted the day before and during his visits to her over those two days Andrew felt she wasn't really there.
She was sleeping a lot and not very lucid.
He went to the hospital with his father to say goodbye and then returned home, sad but not devastated.
Janet had been ill and her quality of life has deteriorated a great deal over the past few months.
She was 81 years old.

The following morning Andrew was online and read the news about Ryan Schumacher, the husband of our dear friend Meri in California.
And there it was: a huge amount of perspective on our own situation.
Meri was one of the first people whose blogs I read when Frank was first diagnosed and her stories offered a great deal of support to me, all at sea with the business of managing the beast that it Type 1 Diabetes.
She helped me to be a proud D-Mama and to let nothing stop me from doing my best every day.
She is never anything but positive and supportive.
Meri is one of THE MOST IMPORTANT people in my life as the parent of a child with Diabetes.
For anyone new to the wonder that is Meri (and I am aware that most people reading my blog know her already!) let me say a few things:

Meri and Ryan have four great sons.
Three of their boys have Type 1 Diabetes.
Three, not one, three.
All the fear and hard work and finger pricks and hypos and hypers that Andrew and I deal with are dealt with by Meri and Ryan three times over.
How the woman has the energy to blog used to amaze me but I do now understand the need for it; the release that comes from putting those words down on the page and the joy and peace when comments roll in and people respond telling you they feel the same way.
Meri is always there for every other parent in the Diabetes Online Community (DOC).
She gives support constantly and asks for it when she needs it too.

And as we plan Janet's funeral I am also thinking constantly about Meri and Ryan and the long and scary fight that lies ahead for them and their boys.
My Mum and Dad gave me some money for The Diabetes Society last week (they meant JDRF but can never get it right!).
I have sent it to the Schumachers.
It was the only thing to do.
I am telling this story here not to point out how great I am ( I am really not as what I want to do is jump on a plane to California and help somehow!!) but to ask any of you that might be reading to check out the Schumacher's story for themselves and if moved to do so, to contribute in any way you can.
It is very possibly the only thing to do.
Love to all.
It is a sad week but may we all find peace in our hearts.