How could I not post this cute picture of Frank and his good friends Maria and Elsa? They came over today and I helped them choose coloured felt for a butterfly crown each from this book, which they duly wore in the garden and to the play park. 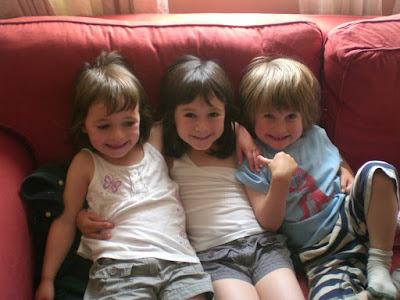 Frank was the only one I managed to photograph well enough to see the crown as he was held hostage in the swing.
The girls were just a blur as they were all having such a good time. 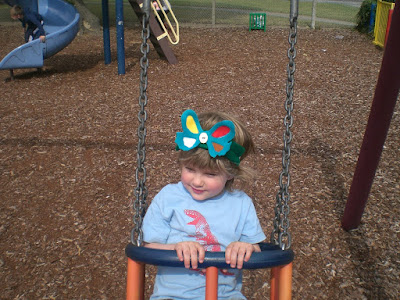 Diabetes News Update:
We have an appointment for early September for the clinic in Cambridge to begin the process of getting a pump.
Here in the UK one needs to "qualify". You know how it is everywhere; it's all a case of funding streams.
Having a lazy-arse pancreas isn't enough.
We are not at all sure we will qualify but are interested to get the process going and prepare Frank for it all.
Any advice for the early stages?
How can we introduce the idea of a pump to our little boy without freaking him out?
I feel like crying at the thought of having to fill my brain with more information but I know it will help with controlling his sugars with regard to his erratic eating. This evening he refused the pasta with butter and Parmesan (even though I had talked to him about it and he had said he wanted it). So no dinner, no insulin, just a night time snack and me wondering where my eat-everything baby went to?
All advice gratefully received, even if it involves my lying in a darkened room for a while ...
Posted by Jules at 21:40