Our week so far

Ok, so, here we are, Thursday evening and posting, finally, after a humdinger of a week (and it's not even over ...).
We made it to the hospital with both myself and Andrew having stomach pains due to stress. Once there we were greeted by Claire the fantabulous Diabetes Specialist Nurse (who has herself been Type 1 for 26 years. She looks about 12 so I have no idea how that is even possible!).
We then spent three hours with her and three other families learning how to navigate the Starship Enterprise, er, sorry , the Medtronic pump.
It went really well.
The other families were really committed, like us, to looking Diabetes in the eye and making their children's lives as healthy as possible. They too were freaked out and out of their comfort zones (if indeed poking your child to the point of bleeding several times a day can EVER be termed a comfort zone).
We played with the pump, had a go at changing the reservoir or setting it up and then I got to wear it for a while and showed Frank how it was inserted.
By twelve thirty we were left to take our box of goodies home and practise, practise, practise.
We have saline solution to use and Frank needs to get used to wearing it and will still need injections for this week.
After the hospital we broke the journey home by pulling in for a picnic in the camper van at a country park just outside Cambridge.
The sun was shining.
It was one of those days that herald the Spring and we loved strolling around (with sticks, in Frank's case) the 2,400 year old site (it had been an encampment and the earth is maintained to show the shape of the camp). If those dates make your jaw drop just think of the cheap motel we stayed in the night before that was right next to a Bronze Age burial ground, some 8,000 years old (give or take a month or two!). 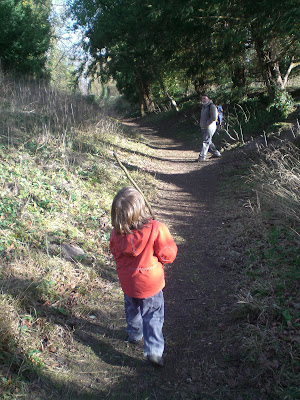 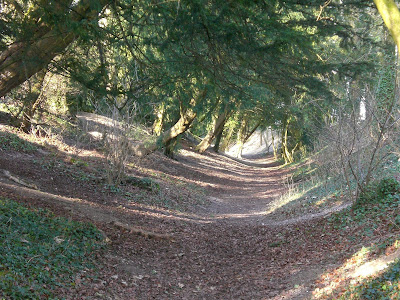 This was all very grounding after a morning of huge learning.
Then it got interesting ...
On the way home my stomach began to feel unsettled and after about half an hour I pulled over and .. er .. lost my lunch.
Andrew took over the driving and I tried to lay a flat as I could, moaning on the back seat as he headed home.
Never has a journey felt so long.
Once home I made a dash for the bathroom and after an hour or so went to bed and dozed.
All plans to look at the pump went out the window with my lunch.
Next day Andrew had to work and I was OK but weak.
The only thing I had eaten that was different to the boys was a tuna bean salad.
Damn those ready made salads!