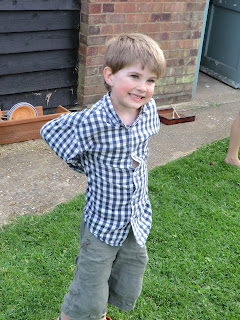 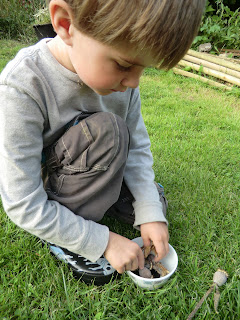 And the week before last this boy was weighed at the hospital and his blood pressure taken, his HbA1c taken and his height measured.
He has lost weight.
The hospital were telling me they are now officially "concerned".  I go home and Google "unexplained weight loss in children".  It's not pretty (no shit, Sherlock, right?) but he HAS NO SYMPTOMS.
He is fine.
We are under the care of two separate hospitals for Frank's diabetes.
One here in town for his general D-care and one in Cambridge for his pump.
They are both fantastic.
We cannot fault them.
However, after a few days of calling one of them and asking for the latest blood test results so we could see if coeliac disease or maybe thyroid issues were at play here (and need I add that we were rather heavy hearted all that time), we were told that due to human error his weight was plotted wrongly on one of our previous visits and, whilst he hasn't gained much weight, has HAS NOT LOST ANY.
Good grief.
That was four long days.
And on we go, taking it one day, maybe one week at a time.
This experience really highlighted for me the progress I have made in accepting diabetes, that uninvited guest who just won't bugger off, in our lives.
It is not the first thing out of my mouth when I meet someone.
I don't feel the need to blurt it out and I feel so much healthier for it.
Frank is now of an age where he would possibly begin to feel "defined" by his diabetes as I blurt it out to new people anyway, when before now he was perhaps too young to take in what I was saying.
The one thing I am now very hot on though is not letting people get far in the "poor little boy, he can't have sweets" or "but he looks so healthy" or, as from my own bloody mother on the phone this evening (and on speakerphone no less, with Frank in earshot) "I suppose he'll go to school one day, but it's difficult with his (pauses to find the right word and then whispers it as though it is an profanity) "illness".
Speakerphone was switched of smartly and mother's ridiculous inability to "get it" silenced for her grandson.
And on we go!
Posted by Jules at 23:39