The Sky and River in Constable Country 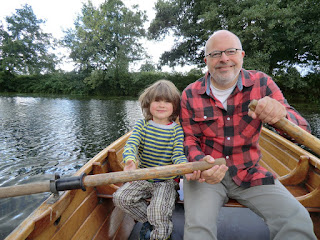 Early this summer we made a family list of all the things we would like to do before summer drew to a close.
Well, today is 28th August and we finally got around to taking Frank out on the River Stour in a rowing boat.
We are all huge fans of The Wind in the Willows by Kenneth Grahame and love the stretch of water between Dedham and Flatford.
One can walk along the river from the pretty village of Dedham to Flatford along the Stour Valley.
One side of the river is in Essex and the other in Suffolk.
It is our go-to family walk for any occasion.
Once in Flatford there is the water mill and a fab tea room and cafe (always a winner!). The mill was famously painted by John Constable (and by this I mean he painted a picture of it not that he whitewashed it!!).
And if you have a look at his paintings he took such care over and put such detail into his skies. Big billowing clouds, shades of grey, blue and purple.
Wonderful stuff.
These pastoral scenes have become a little over-exposed as they have been used for placemats and tea towels and ties, much like Vincent's sunflowers.
I don't think it is fashionable to love Constable but as he painted the beauty of my home county I feel a great fondness for his work.
So, as you have a look at my two men in a boat, look also behind them to the trees, the willows dangling into the water and that big Constable sky. 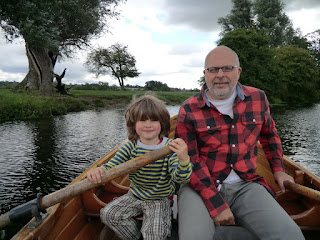 They loved it.
Frank, of course, wanted to row and those huge oars weigh a ton for him so he resorted to sitting at the front and either shouting "Ahoy" to other people heading up the river or calling out "Fire the cannons" at them instead.
I sat smiling and hid behind my shades ... 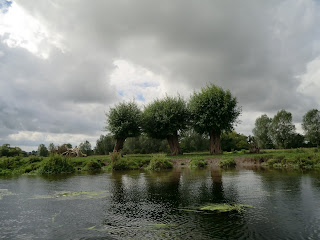 We docked the boat back at the launch jetty and about three seconds later (with no exaggeration) the sky opened and it rained like mad for as long as it took us to run to the van!
We picnicked and steamed the van up as we dried and then drove home via McLaughlan's for sweetcorn fresh from the fields.
A lovely kind of day.