Tomato Soup (to keep the vampires away)

I enjoyed some kitchen time today making this yummy tomato soup. The recipe was from a new TV series hosted and written by Sophie Dahl, who is now making a positive name for herself in the UK with her food writing.
All the recipes in the shows have been just soooo tasty and I went for the soup today as I really wanted the strong flavours. 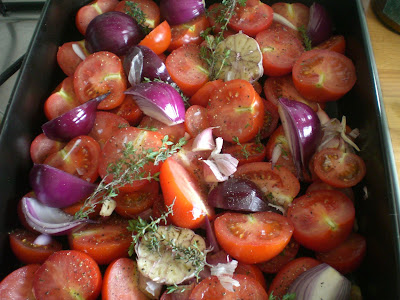 Tomatoes are out of season but these were from Spain, which being Europe still counts as almost local (ahem, she clears her throat with a shifty look). 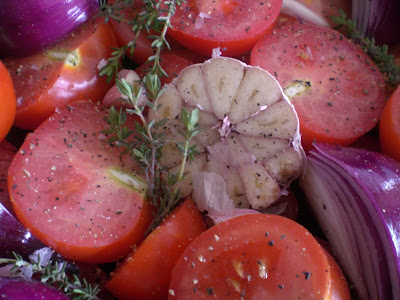 Lots of tomatoes (2kg!), two heads of garlic (Holy Moly), thyme from the garden, red onion and olive oil. Maldon salt (very local for us, so lets me off the hook with the tomatoes) and black pepper.

All roasted for 40 minutes in a medium hot oven. Let it cool a bit then blend until smooth. Add a dash of Worcester sauce and balsamic vinegar and a teaspoon of sugar. Warm through. 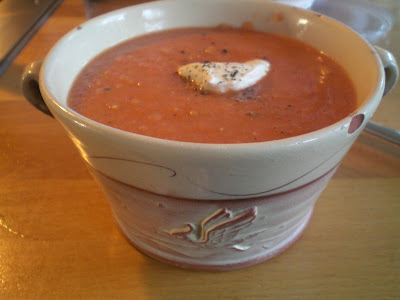 I then added a dollop (love that word) of creme fraiche and lots of black pepper.
I photographed it well but forgot to notice the big chip on the side of the bowl!
Ah me, shabby chic without even trying...
It was very very tasty and so very, very garlicky. Frank won't eat tomatoes or soup at the moment (it's a three year old thing) so I didn't even have to work out the carbs.
Check out the full recipe at www.bbc.co.uk/recipes and look for Delicious Miss Dahl and tomato soup.
Posted by Jules at 21:20