So, three and a half weeks in Brittany. Land of butter, croissants, pains au chocolat and general pastryness. And a three year old with Type 1 Diabetes. A match made in blood glucose hell? Not at all. 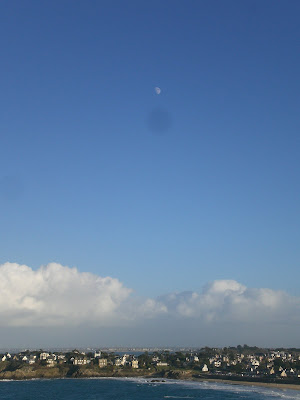 Frank has always had a healthy diet. He was just two years old when he was diagnosed with T1D and honeymooned for a few months before becoming a fully fledged member of the insulin gang. Honeymooning is when some of the insulin cells in the pancreas are still functioning and the auto-immune response hasn't yet blasted them all to hell. It was hard to get his numbers right at that time as we had no idea how many cells were functioning or indeed to what extent. We coped by doing our best. I added weeping profusely to the mix, pretty much on a daily basis. His immune system didn't listen. Immune systems are like that. They dance to the beat of their own drum and when they have a target they are fantastic at blasting it. Shame when it's an own goal.
We get mixed reactions from others with well-meaning comments like, "Oh, how awful for you, not being able to let him have any sugar" (he can and does, ironically more than he ever did before as it's more necessary now and I walk around with a bag loaded with juice and fruit purees like some fast food fruit bat) or "Don't give him insulin, his pancreas needs to be retrained" (this to me in an organic health food store only a month after diagnosis. I was horrified as I realised very quickly, even in my addled and shocked brain, that this person meant Type 2 Diabetes, a totally different animal to Type 1. Terrible advice.) or "It could be worse, he could have leukemia" (Are those my only choices? He could have neither, or maybe just a slight squint or a mild rash) .
So, we control his food and exercise in a calm and relaxed way as much as possible, recognising that three chocolate bars for lunch isn't good for any three year old and we try to live as we imagine we would have had we not been hit by the meteor of diabetes.
The one thing that did change was our confidence when considering travelling with our boy.
We took him to Northern Europe whe he was just three months old, heading off to Denmark, Germany, Poland, the Czech Republic and the Netherlands for twelve weeks in our camper van and staying in the van as well as in hotels and with friends. Post diagnosis we lost our mojo for hitting the trail with abandon and took a year before we felt confident enough to go abroad. Even then a week in Berlin was easy as I speak German and we had both already been there.
However, nearly four weeks in France where I am confident only with a menu in front of me and flounder with anything approaching conversation was another matter.
And so to the land of BEURRE! Brittany is famous, even in the rest of France, for going heavy on the butter. We assumed we'd need to be increasing his insulin over the holiday but we ended up halving it. Go figure.
We had croissants for breakfast every other day. With jam. (Aren't those jammies cute? Thanks Granny and Santa). 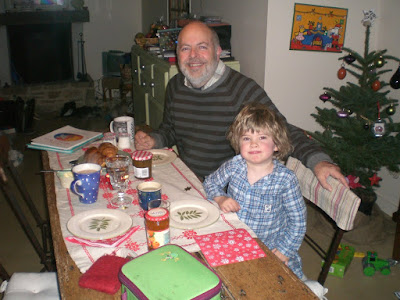 We walked and ran and read and slept lots. Frank invariably raced me everywhere. 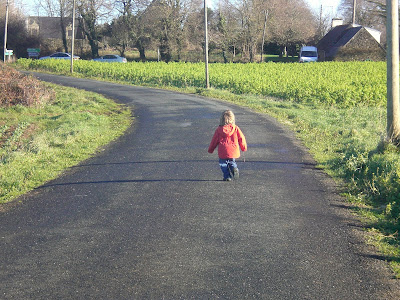 We ate good, real food and took our time over it. In France they are not afraid of carbs or protein and balance them well. Frank loved his steak hache with frites (although in this photo you can see the distain he has for salad!) 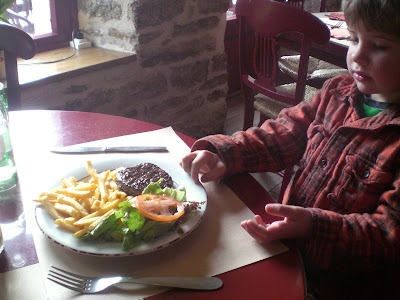 We enjoyed country walks and running around on beaches as much as the weather allowed. 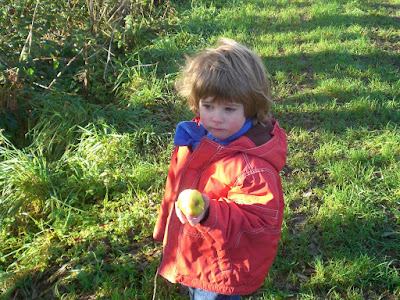 People eat WELL, WELL, WELL in this beautiful land. They eat real food with real fats and sugar too. And they don't snack much. They live for the pleasure of good food and eat it slowly, savouring two hour lunch breaks and good conversation. Children eat the same food as adults. They drink tiny little coffees (we tried not to look hugely disappointed when our "grand cafes cremes" arrived and were tiny to the point that we felt like Hagrid drinking from normal cups, so used are we to huge lattes and the like).

I do wonder how life is for French diabetics. There seems to be little denial but an embracing of pleasure at good and real food.

I don't think we need to emigrate though. Just learn from what we saw and experienced and incorporate it into our lives.