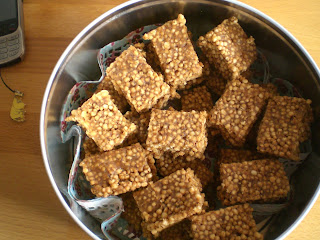 Thank you to everyone that took time to respond to my call for help. It really, really helped to hear other stories and some great ideas too. You are all fab!
*************************************************
In an attempt to get the Boy Wonder to consume a variety of grains ... oh, who am I kidding ... in an attempt to get Frank to eat ANY GRAIN OTHER THAN WHITE WHEAT, I stealthily add various things to recipes he might eat.
To his white bread I add whole wheat or rye or rice flour. He used to eat rice but won't now. He will allow pasta on his plate but tends not to eat it!! At someone else's house he will devour a whole bowl of Bolognese and pasta but, alas, not at home.
He is suspicious that I am sneaking contraband into his food.
He has a point ...
I have taken to adding ground linseeds or ground almonds to his porridge, making it also with half oat milk and half cow's milk. I sneak squash and sweet potatoes into Bolognese sauce. He will eat raw carrots and celery and peas from the pod and that's it for veg.
I am sounding so over-controlling here but I am concerned as he won't eat other veggies or rice and with his Type 1 Diabetes I am aware that any days of high BG will result in an extra loss of nutrients.
I think we do OK, all in all.
I am not panicked about this but maintain an awareness of what foods are building his body. He eats ice cream and crisps, I am no purist and am very clear on the idea of never forbidding any foods. Children with this condition need no extra food issues in the mix, ideally.
I am reading "The Healthiest Kid in the Neighbourhood" by William Sears at the moment. Lots of the information in it isn't new to me as I have always been interested in nutrition (thankfully, as I had a head start on getting a grip on the whole carb counting thang) but it is very informative about snacking and phases kids go through. I have also found it really useful for giving me ammunition when shopping with Frank. Saying things like "We don't buy that in our family" has been working wonders. However, I think of people like Meri, with older kids, and know I will only be able to use this for a short while. I'll be shopping on line soon!!
One snack that I have rustled up this week has met with a lukewarm response but hasn't been rejected outright are the Peanut Butter treats above. They are really tasty (Andrew and I love them!) and from this book, which has me inspired to go veggie again very soon.
I bought my ingredients in the Wholefood Store in Manningtree (the store I long to be locked in overnight!) and used puffed quinoa instead of rice. They are gluten free and I like to keep them in the fridge to keep them more solid and chewy.

Combine the peanut butter, maple syrup, salt and agar flakes in a large sauce pan over a low heat and stir constantly until smooth, hot, melted and bubbling just a bit. Turn off the heat and add the cereal. Stir until well-coated. Transfer to an 8 by 8-inch baking dish and press into place. Refrigerate until completely coo, then cut into small rectangles with a sharp knife.
Makes around 20 treats.
*******************************
In more specifically D-related news we had our first failed site two nights ago and were up until 3am testing and bolusing every hour until we decided to grasp the nettle and change that bastard. Frank moaned a bit but then chatted to us and we all go on with it. the cannula was all bent sideways. His pre-breakfast BG was 5.7, such a relief after 23.8 and similar all night.
In retrospect as I primed the set something felt different in the spring-action thingy, but instead of not using it, I kind of imagined it would all be OK even though it felt a bit wrong.
Next time I won't do that. And from what I read there will be a next time.
Posted by Jules at 20:36