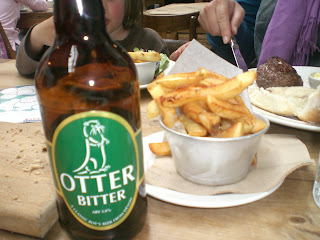 After leaving Devon last week we headed East.
En route to my sister's place in Dorset we stopped off at the River Cottage Canteen in Axminster.
We are big Hugh Fearnley-Whittingstall fans in this house and so admire him for all he has done to raise awareness of local food issues and animal welfare.
At the canteen Frank was able to have an organic beefburger and chips (he never eats the bun). The salad leaves on the side were regarded with horror and removed by me.
He regards them rather like I would a dead rat on my plate! 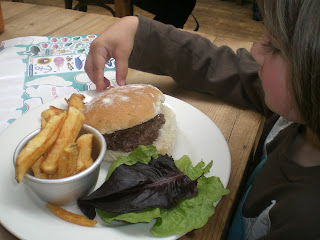 (The boy wonder and his meal) 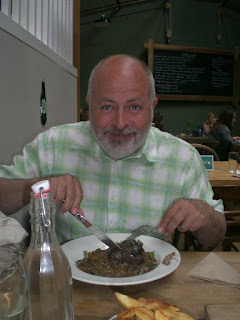 (The other boy wonder eats his faggots)

And Andrew chose Faggots.
I kid you not : pig's heart, liver, and fatty belly meat wrapped with caul (membrane from the pig's abdomen) No idea what it's called in the USA.
Am pretty sure it's not the same thing ... ahem.

I had the beef burger too. I am not at all fond of red meat but felt that here, in this cafe, of all places, it would have come from a happy cow.
I was veggie for22 years and still struggle a bit with the dead animal aspects of meat, even though I am in favour of it being eaten and farmed sustainably.
This day was a happy food day.
Other days are not so great.
****************************
I love to cook and have had such a great time introducing my boy to a whole variety of foods and tastes.
He began with rice porridge and mango and banana.
He ate everything I gave him, except avocado.
My boy that eats absolutely almost anything has now become the same child that (I swear he said this) told me three nights ago, on being presented with his bedtime snack of dried apricots, almonds and slices of apple: "This apple isn't crunchy enough, Mummy".
My mouth dropped open and I felt bewildered, again.
I am struggling to get a variety of food into him.
He is eating things one day and refusing them the next, often for the most spurious reasons.
He will eat meat and potatoes.
White bread and peanut butter (although I an now sneaking almond butter into him by stealth as I hide it under the peanut butter! Mwahaha!).
Carrots and peas from the pod.
He would live on bacon or
salami given the chance.

Have any of you been through anything similar to this?
Is it a phase?
Do you have any recommendations?
What more can I do?

P.S. I honestly don't let Frank know I have these concerns. He knows I want hm to eat lots of different foods that help him grow strong, but that's the extent if it.
Posted by Jules at 20:49