It's a complicated boogie 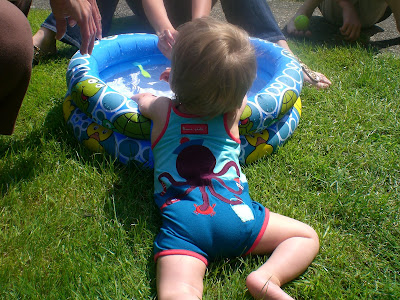 How do any of us get this in any way right?
Frank's regime involves four injections of insulin and four blood glucose tests every day.
His little finger tips are a bit calloused as he will only let me use four of his ten available fingers (and I confess here to liking it when I say, "Give me a finger" and he points his middle finger at me in rude salute to Diabetes and I think "Yup, that's what I think about Type 1 too!").
His peachy bottom (as seen above) looks like a pin cushion.
And yet, all this is GREAT if he is alive and thriving.
All the sleepless times, all the tears and stress and grey hairs and dark moments are FANTASTIC if we can get it right and keep him healthy.
This past week we have seen Frank's sugar levels in the teens, consistently, and only yesterday did we see really good numbers.
Budd and I had talked and talked about ratios and carbs and have gone back to measuring and weighing much more carefully.
Ratios have been altered and his long-acting insulin upped a bit.
And then, after a positive day of excellent numbers, I went upstairs at 10pm to test Frank.
To my horror I saw 26.2 !!!!
What the ...?
We talked some more, we filled his drinking cups, changed his nappy, grew a few more grey hairs, swore a bit and then in conclusion decided that we shouldn't intervene in case we made it worse.
I fell asleep thinking of my boy's body being ravaged by evil blood glucose and him feeling terrible when he woke up. (Bizarrely I dreamt I had a beard! Analyse that for me someone. Would a full beard help me in some way?! What is going on in my brain??).
And then Frank lies in late this morning.
I wake naturally at 7am and am immediately convinced he has died.
I tiptoe into his room.
He breathes!
He is alive!
OK, now don't wake up I want to go back to bed!
He wakes, he looks and feels fine he says. He gets into bed with me and we cuddle. We play at being badgers in the forest by hiding under the duvet and popping our badgery noses out.
Then we get up and Budd tests him: 5.2.
Go figure.
So I return to my original question:
How do any of us get this in any way right?
We are firing at a constantly moving target and are dealing with the human body in all its subtle and intricate details.
It's a complicated boogie indeed.
(Perhaps the beard is a Yoda beard of Wisdom? Any other thoughts?)
Posted by Jules at 11:09