To carb or not to carb

Ah, yes, carbs, carbs, carbs...
We count them and we measure them and we guess them and we still get it so very wrong and sometimes whoopingly right.
I work hard at not hiding the carb counting from Frank but also not overloading him with the issue. I do it discretely and he is showing a little interest in it all sometimes. It will develop naturally.
I don't forbid any foods and it took me a while to realise that when I was saying no to certain foods it was because I would have said no anyway, diabetes in the picture or not.
For a while I had lost the Mummy I had imagined I was going to be and thought she had to be replaced by D-Mummy.
However, I think she is one and the same person.
Some of the things we do: 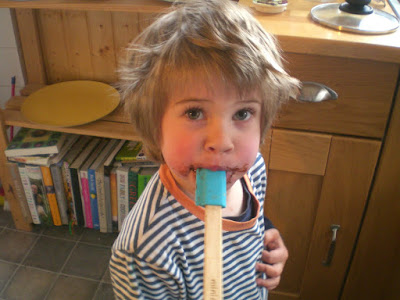 Licking the spoon from making sunflower seed clusters.
I timed making them to coincide with snack time and included them in the allocated carbs. 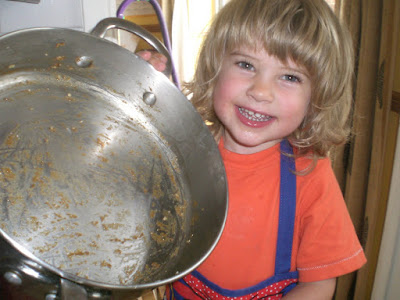 The face of a flapjack happy child! Again licking the pan was his snack and I left enough mixture in it to be around the right amount. Doing this so reminds me of childhood and I do not want him to miss the experience just because his pancreas didn't pull the drawbridge up in time!
Licking spoons is important. 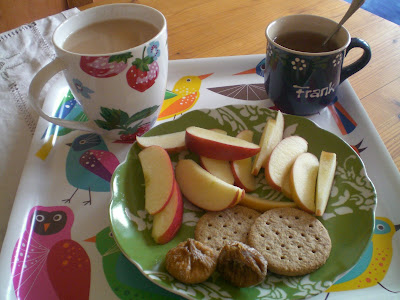 Snack laid out in the afternoon. We shared this one. 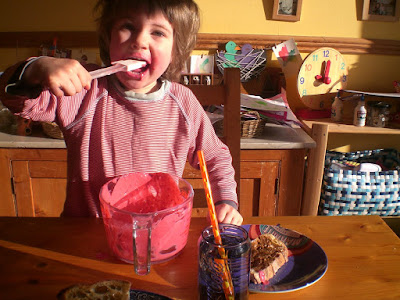 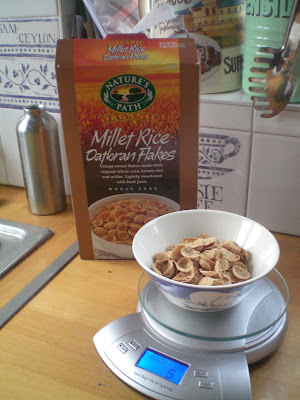 Getting breakfast ready. He loves these flakes and has them with goats' milk.

I am lucky he loves his meat and nuts. He is essentially a cave man and has recently taken to demanding "meat with bones" at which he gnaws like a neanderthal! As a recent ex-veggie (pregnancy brought on cravings for roast chicken after 21 years in the lentil zone) I have to look away, still uncomfortable with the sinewy aspects of meat.
He chooses to fill up with protein and eats carbs in quite small amounts, except at breakfast.
I cannot imagine living any other way now.
A heartfelt P.S to all of you who posted your kind comments yesterday. I had a hypo to deal with at 10:30pm but the night went well and I gained so much strength from not feeling alone.
Posted by Jules at 21:42